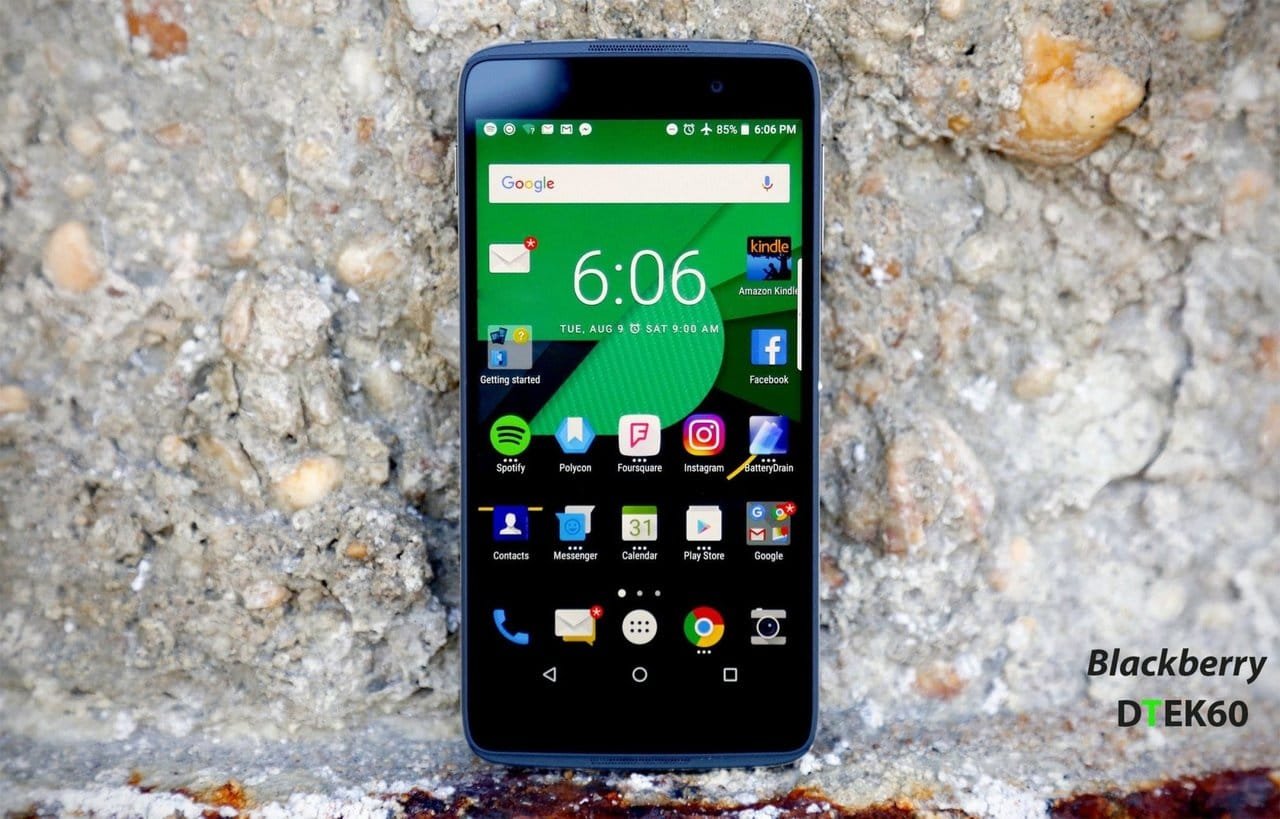 BlackBerry DTEK 60 – Price, Release Date And Everything Else You Should Know

The third Android phone was finally launched by BlackBerry last week with not much fanfare or an official announcement. This big device, BlackBerry DTEK 60 is all touchscreen backed by a powerful processor and supports Quick Charge as well as Type C connectivity.

The DTEK 60 is similar to DTEK 50 and is a complete all-touch device rather than being a physical keyboard hidden under a portrait slider.

As rumored earlier, the DTEK 60 resembles the Alcatel Idol 4S with a marginal difference in the design at the back. The approach of rebranding Alcatel Idol therefore, continues with DTEK 60. BlackBerry is also on record that it would not be designing or building its own phones. Therefore using a reference design from TCL, the hardware partner makes sense. TCL manufactures phones for the Alcatel brand as well as Vodafone.

The glass finish in place of a textured plastic is a major difference in DTEK60 compared to DTEK50. Though this makes the new version a little more slippery, it helps in distinguishing this expensive model from the others.

As in DTEK 50, the new version sports the convenience key, that can be programmed, for launching functions or apps of your choice and also mutes calls when you are on another active call.

The display is similar to BlackBerry Priv which means you get the large 5.5-inch display with Quad HD resolution that brings a pixel density of about 534 ppi. The curved edges were rumored to be coming to DTEK 60 but though slight curves are seen, they are nowhere near what we saw with the PRIV.

This year, BlackBerry has raised its ante on cameras, at least with regard to the pixels in the sensor. DTEK 60 sports 21 mpg sensor in the rear camera and 4K video capture with a f/2.o lens of six elements. Full manual controls and dual-tone LED flash are also paired with the camera. The front camera sensor is 8 mpg with full HD video.

For now, the hardware specs are similar to most other flagship products in the market. In other words, you will see the usual 4GB RAM, 32GB storage with the 3000mAh battery incorporated into a device that features fingerprint scanner, Type C connector, and Quick charge 3.0 support. The snapdragon 820 is the processor which arguably is among the best from Qualcomm. However, we should take note that the processor is not Snapdragon821 which is generally found in some of the high-end devices and Pixel phones. So, there will be no support for the Daydream VR and even a software update is not going to be helpful in this regard.

A micro SD card can extend the storage up to an additional 2TB.

You can order the DTEK 60 right away straight from BlackBerry and the price is currently $499. A Rapid Charger and a “Smart Pocket” case in genuine leather are also included in the price.

For more details, you can visit the BlackBerry hub!