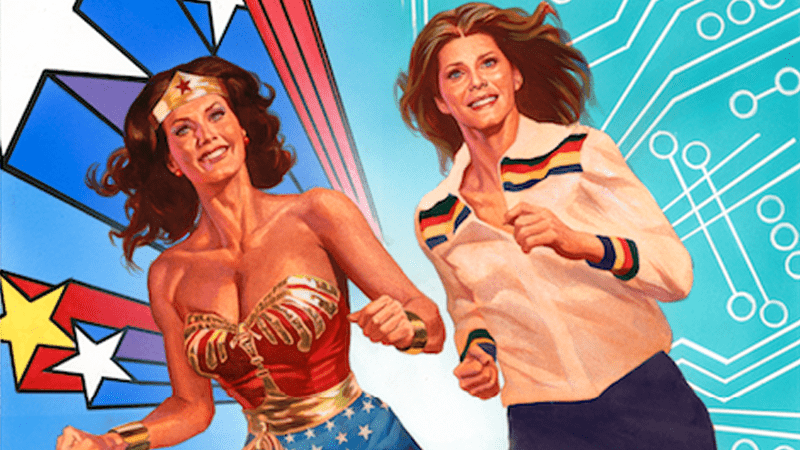 Two legendary superheroes from comics of yore are joining forces in a new limited series to be published this December, in a deal between Dynamite and DC. This is the first time pairing of two of the most beloved female superheroes in history. And with more and more women standing strong in pop culture, it couldn’t have come at a more prescient time.

Hank Kanalz, SVP, Editorial Strategy and Administration for DC Entertainment added “DC is thrilled to partner with Dynamite once again on a crossover of classic pop culture characters. I can’t wait for fans to see what happens when these two iconic heroines meet in December.”

With 70’s nostalgia being a thing of the past, you would think the book would be presented in a darker style that may be more modern. However, that does not appear to be the case. This one of a kind pairing will be drawn in the style of the two stars from their respective television shows from the 70’s with Wonder Woman being drawn as Lynda Carter and the Bionic Woman as Lindsay Wagner.

According to CNET, the books will be done by Andy Mangels (“The X-Files”) on writing and illustrated by Judit Tondora (“Protectors”). Artists Alex Ross and Cat Staggs will also be creating various covers.

With all the recent spate of interest in teaming disparate heroes, this seems like a natural fit. “For 40 years, fans have been wondering what would happen if their favorite television heroines got to meet, “ Mangels told CBR. “I’m thrilled to get to mix these two feminist icons into a massive story that respects not only the characters themselves but also the magic that Lynda Carter and Lindsay Wagner brought to their history-changing roles.”

Government agents Jamie Sommers and Diana Prince team their respective powers against a threat to national security in this series too big for the small screen! In this action-packed miniseries, the two television titans team up to fight a rogue cabal bent on wreaking havoc and stealing deadly weapons. Can CASTRA be stopped before their real targets are revealed and lives are lost? With super powers, bionic enhancements, surprise villains, and an invisible plane, just about anything is possible!

Of course the idea of two women taking on a terrorist organization will probably need a soundtrack by Beyonce.

Wonder Woman ‘77 meets the Bionic Woman hits stands on December 7th. And for the latest in news from Entertainment, be sure to visit N4BB. Move over boys!