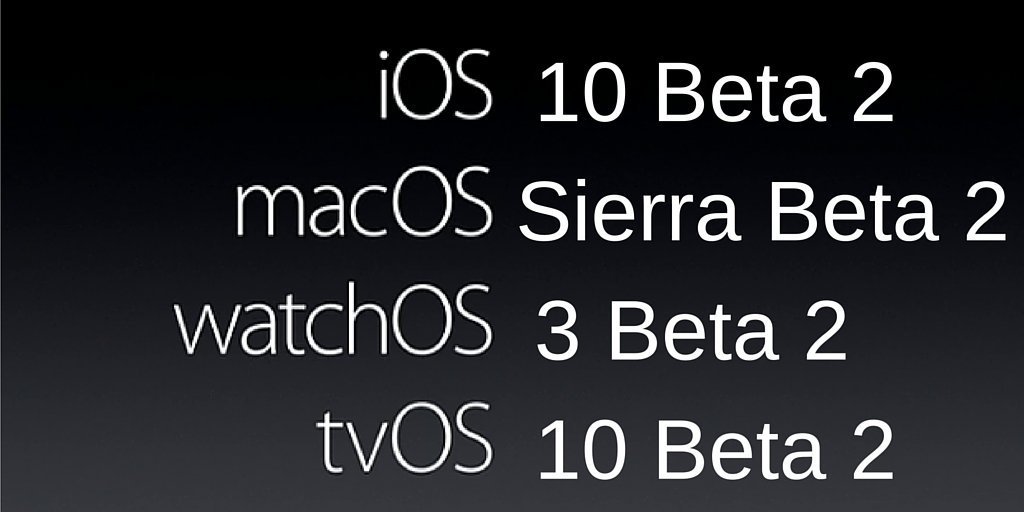 Apple has released iOS 10 beta 2, watchOS 3 beta 2, tvOS beta 2 and macOS Sierra beta 2, for registered developers. The updates are available as OTA downloads on supported devices and through the Apple Developer portal.

The first betas for iOS 10, watchOS 3, macOS Sierra and tvOS 10 were released about three weeks ago, and featured a lot of new changes, improvements, and bugs.

In iOS 10 beta 2, Apple has heard the feedback from the developers, and fixed a lot of bugs. There’s also plenty of improvements made to the UI and a lot of new features.

Widgets are now available in the Notification Center at all times. Previously, you had to be on Home Screen zero. the Lock screen or inside an app to view the widgets. Notifications are easier to interact with on devices without 3D Touch. You can simply swipe down to reveal more details.

The Apple Music app has been updated and that horrible large text has been replaced with normal text. You can also adjust the font size in Settings. The ability to shuffle songs by an artist is back, and the Shuffle button is back in the Songs section.

A new ‘Rest Finger to Unlock‘ option is available that allows you to unlock the phone by simply resting your finger on the TouchID button. No need to press it.

The Messages app has an option to send Low Quality images, and there’s a new iMessage App Store. There are more 3D Touch shortcuts and changes to icons. Apple News app can now be removed from the Home Screen.

These are just some of the main new changes in iOS 10 beta 2, but there are several more improvements and changes that you’ll find.

If you’re a registered iOS developer and already have iOS 10 beta 1 installed, you can download the new update by going to Settings>General>Software Update. You can also download the update from the Developer Center.

The latest watchOS 3 beta 2 was also released alongside the new beta for iOS 10. The update is available via the Apple Watch companion app, download and it’ll automatically install on your Apple Watch. There aren’t any new features, but this update is mainly a tag-along release for the iOS 10 beta 2.

A second beta for tvOS 10 has also been released for registered Apple developers. The new beta supports the 4th generation Apple TV and is available for download using the Software Update feature. If you’re running the first beta on your Apple TV, simply head to Settings>System>Software Updates to check for the new beta and download.

Finally, Apple also seeded the second beta for macOS Sierra. The new beta carries the build number 16A239j and is available for download via the Apple Developer Program. You can download the update using Software Update if you’re running the first beta.

That’s all the new betas that Apple seeded this week. Apart from these main software updates, new builds of Xcode 8, Apple Configurator 2.3, Apple TV Remote 1.0, and Safari 10 are also available. We’ll let you know of any other new features as we find them.