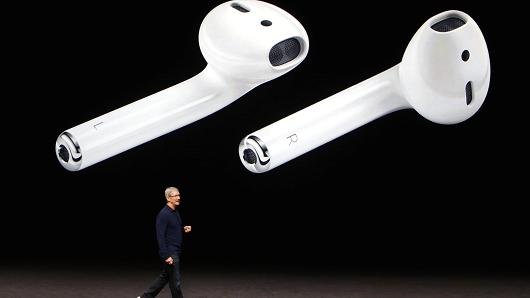 It is no news that the Cupertino tech giant missed the October month launch scheduled for the AirPods. Apple’s CEO Tim Cook has hinted that the most rumored next-generation wireless headphones will be out soon!

Apple first planned the launch of the AirPods alongside the next generation iPhone, iPhone7, and 7Plus in October 2016. However, the company only made an announcement about the AirPods, the design, and price at the time of the launch.

Apple also, released a statement a few months back that, the early response of fans on the AirPods has been incredible. The company also had stated that they don’t believe in releasing their product to the stores before it is ready. They also said that they would require some more time for the product to be market-ready. Although, Apple has not mentioned why there has been a delay in the launch of the AirPods.

After the statement, there has been a long silence. There hasn’t been any news or updates from apple on when we can expect the AirPods. A concerned fan has shot a mail recently. And you know what? Apple CEO Tim Cook has replied to the mail.

A MacRumors reader emailed to Apple CEO Tim Cook asking for the release date of the next-generation Bluetooth earphones. He has expressed that he was really into the wireless earphones. That, it is difficult to charge his iPhone 7 and use his EarPods simultaneously, as both share the same port. The reader has also asked Tim Cook to share if it would take a month or 6 months or more. Also, if the AirPods are taking much time, he wrote that he could buy some other wireless headphones. He also berated to give a release date in his mail to CEO Tim Cook.

Apple CEO Has Hinted On The Most-Anticipated Release

Tim Cook thanked the reader and replied, “Sorry for the delay.” He has also mentioned that Apple is finishing up the AirPods and he expects to start shipping them in the next few weeks.

AirPods UK Release Date: Stores In London Get Ready For The AirPods Shipment

The central London store is the first Apple Store in the UK that has added huge video walls, free workshops, and an amazingly new makeover. Rumors suggest that Apple will ship out the AirPods to the UK as early as December 17 to 19, 2016. Perhaps, that could be the reason behind the stores getting dolled up.

All You Need To Know About The AirPods

Apple touts that the Bluetooth earphones will offer high-quality audio playback. They can pair with all of your Apple devices on the cloud. You can summon Siri just with a double-tap. The accelerometer built into each AirPod identifies if you’re speaking and filters external noise.

A pair of these fancy wireless earphones and the charging case will cost you £159. The same number in dollars and pounds? That must be saddening UK fans. Yet, don’t they seem an attractive grab?

So you can expect the AirPods to hit the shelves by Christmas. Until then stay tuned!