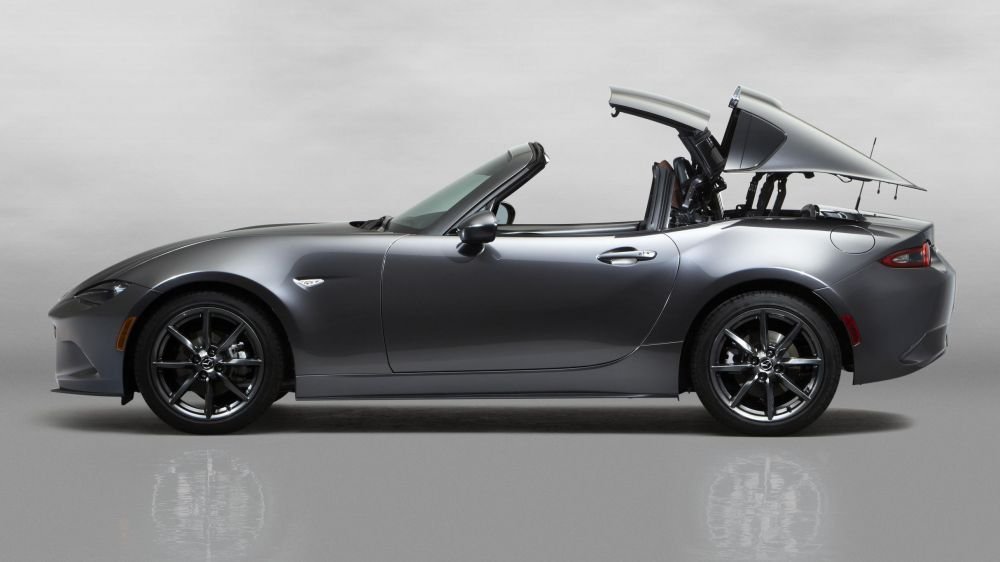 2017 Mazda MX-5 RF was recently announced at the 2016 New York International Auto Show and features a Targa-top, a retractable roof.

Mazda released the 2016 soft-top ND MX-5 last year and it’s been an enormous success. It is a fun little car, similar to the original and now it’s gotten even cooler. The new 2017 model MX-5 RF features a Targa-style retractable roof.

Unlike the soft top version, this is all automatic and once the roof is down, looks even more stylish. The RF in the name stands for ‘Retractable Fastback’ and the mechanism is reminiscent of the Porsche 911 Targa.

In this type of arrangement, the rear section of the car lifts up to retract the roof and the rear window, which is then hidden away neatly.

Despite the new retractable roof, the boot space remains the same at 130 litres, just like the soft-top MX-5. Which is pretty good for a Targa top 2 seater roadster.

You can close or open the roof at a maximum speed of 6.2 miles per hour and the whole thing takes less than a minute.

Mazda has improved the suspension to account for the new weight added by the retractable roof. The MX-5 RF will most likely be a little slower and softer than the soft-top version.

Not much information was revealed about how much extra weight was added and how it affects the performance of the car. It’ll be available with either a 1.5 liter or a 2.0 liter naturally aspirated Skyactiv petrol engines. A six-speed automatic gearbox will also be available, but we reckon you stick to the manual gearbox.

The Mazda MX-5 RF isn’t a powerful car, but it’s a lot of fun and the Targa top will make you look much cooler. A new Machine Grey paint-job will also be optional for the new RF and other models. Pre-orders for this variant will start late summer. Pricing and other details will be revealed later and we’ll update this article when those are available.