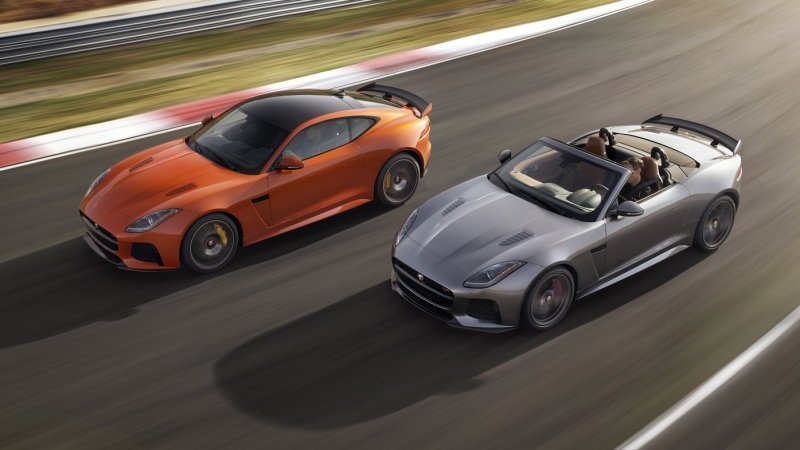 Jaguar Land Rover (JLR) has introduced the more powerful version of the F Type R and it comes in two models; a coupe and a convertible.

The car is powered by a 5.0 liter V8 that has been supercharged, same as the one found in the F Type R. However, the engine has been souped up by the Special Vehicle Operations team at Jaguar Land Rover and now produces 575 hp. The torque figure is now 516, which will propel the SVR from 0 to 60 in 3.5 seconds. It’s also 55 pounds lighter than the F Type R.

The engine is mated to an eight-speed ZF auto transmission, which sends the power to all four wheels.

The F Type SVR Coupe has a rated top speed of 200 mph, but the convertible can only manage 195, which is still quite fast for an open top. JLR has priced the SVR pretty well too, good enough to compete with German rivals such as Porsche and its 911 GTS.

The car uses a new Inconel titanium exhaust system, has carbon ceramic brakes, some carbon fiber parts and 20 inch forged aluminum alloys. Jaguar has made some changes to the exterior, improving aerodynamics for the convertible version.

Several changes have been made to the interior as well, which now includes 14-way SVR performance seats in Jet Leather that has a Lozengo Quilt pattern and embossed SVR logo. You can also choose between Siena Tan or Red Leather. There’s a 770W surround sound system with touch-navigation.

The Jaguar InControl app lets you control the car from your Apple Watch. Lock or unlock doors, turn on the AC by starting the engine, check fuel level and even locate your car, all this from the Apple Watch app.

Jaguar has unveiled the prices for the new SVR. The SVR coupe version will start at $125,950, whereas the SVR convertible will be priced at $128,800. Deliveries for the car will start in Summer 2016, and if you’re at the Geneva Motor Show, you can check the new F Type SVR out.