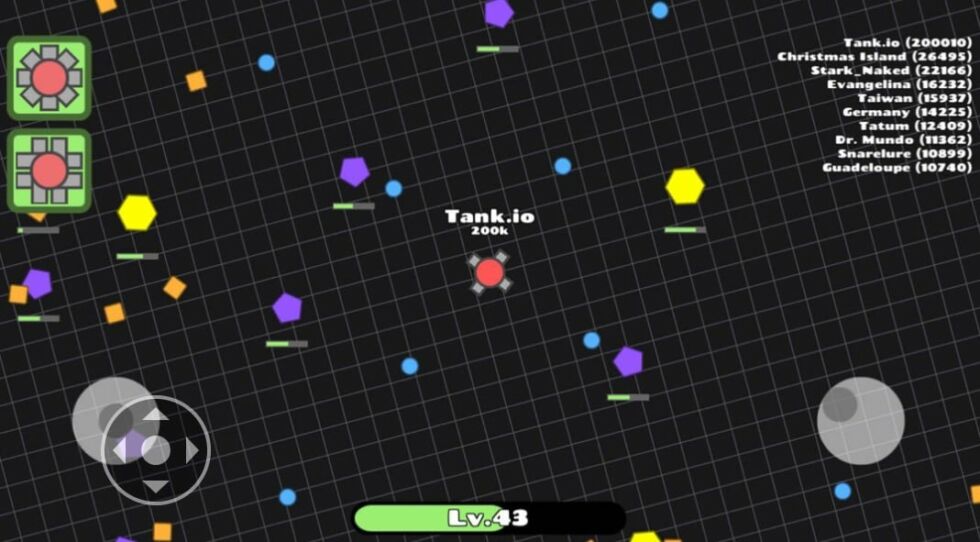 Just as its name suggests, Tank.io is a relative of another hit game with the same ‘last name’, Agar.io.

Like the latter, the game is set up in grids, and while Agar.io only features circles in different sizes as its players, Tank.io features different shapes as its players. The ‘tanks’ in the game, in reality, do not look anything like real-life battle tanks.

So how do you win in this thing? Follow this Tank.io cheats and tricks and you should be able to claim victory sooner rather than later..

Stay in hiding during the start of the game.

This is not because you should cower in fear. This is because the enemies you will encounter even in the beginning of the game are no novice — well-experienced, advanced level gamers are lurking about everywhere in the game.

This is usually the case in massively multiplayer games such as the Agar.io.

So when the game starts, stay in a safe place and target the little shapes floating around instead. This should allow you to power up — and soon enough — you’ll be strong enough to take on other tanks yourself.

Keep track of your stats

Each time you level up, you will gain stat points according to these categories:

The red fist symbolizes your power. This also indicates how powerful your bullets become.

The blue shoe indicates your tank’s speed. The higher this is, the faster your tank becomes.

The green arrow on this game does not have anything to do with the superhero of the same name.

Instead, it indicates your tank’s fire rate. The better your fire rate becomes, the more bullets you’ll be able to shoot at a much faster rate.

The purple heart indicates your tank’s health. It’s best to monitor this every now and then, so you will know how long you have exactly left in the game.

Playing versus the computer

In massively multiplayer games, actual, living, breathing players are not always around.

Whenever this is the case, Tank.io will fill the game in with its own computer-generated players.

You can distinguish computer-generated players from actual living ones by their names — the non-human ones usually go by names taken from the League of Legends game, or a country, while the human ones are almost always readily recognizable.

Take extra caution when playing against these computer-generated players. They’re usually the highest level in the server and — more often than not — are dedicated to destroy you to your last piece.

Throwing off your opponent

One of the best and most effective Tank.io cheats is switching directions ever so often to try to throw opponents off of your track. Keep moving at all times, and, as much as possible, avoid being stationary. This should help you up your chances of surviving.

Whenever you find your tank suffering from major damage, you might want to hide for as long as you can, or until your tank fully recovers from the damages it sustained. There will be times that this might not be easy, but it would be best to find the safest place you can and stay there until you’re strong enough to fight again.

With this type of upgrade, your tank’s cannon is replaced with one that looks like it’s cone-shaped. This upgrade lets you fire bullets at a much faster rate, and they automatically become stronger, too.

Just as its name suggests, this upgrade changes your tank’s regular cannon to a double one. The rate and the speed at which bullets are being fired from your cannon remains the same, but you now have two bullets firing at the same time instead of one.

This upgrade allows you to have a second cannon strategically placed at your back. The speed at which bullets are fired remains the same still, but you now have a weapon to protect your back side.

Do you have any more Tank.io cheats and tricks? Please let us know in the comments below! 🙂